Droughts are a major threat to food security leading to substantial losses of life, livelihoods, and strained economic performance.  To curb this, hazard early warning using satellite imagery, monitoring and disaster risk preparedness actions can be effective by enabling countries predict drought with lead time from weeks to months through maps on vegetation conditions to prepare for fluctuations in agricultural production and pasture condition, in order to mitigate loss. The key variables to be made in the prediction of drought are timing, geographical area and severity, which are made by monitoring indicators such precipitation, soil moisture, and vegetation condition index (VCI). 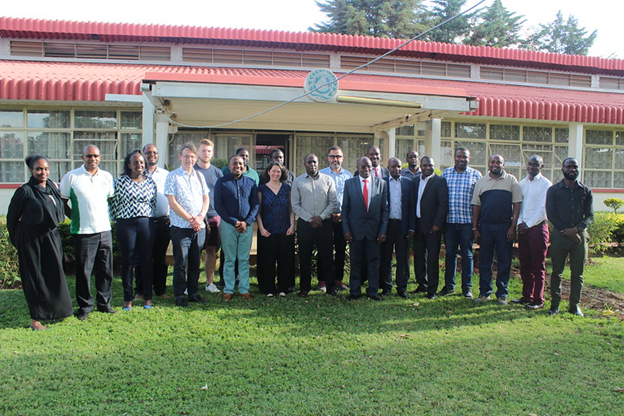 To address these needs, on 11th March 2020, the University of Sussex organized a capacity building training to staff from RCMRD, National Disaster Management Authority (NDMA), Kenya Meteorological Department (KMD), Red Cross Society of Kenya and World Food Programme (WFP).  These are institutions which share information to relevant stakeholders for prompt decision-making with regard to early warning of crop shortfalls, emergencies, food insecurity, investments, and planning requirements for agricultural policies, trade, and markets which reduce risks by preparing for a response strategy.

The one-day training aimed at introducing a new methodology for skillful VCI forecasting, developed under AstroCast, a STFC-funded project that applies advanced data analysis techniques used in astronomy to facilitate improved early warning models. The participants were taken through the code to provide a VCI forecast and produce visualization for a specific county which includes an estimate of the uncertainty. They also gained a theoretical understanding of methods being applied in the AstroCast approach and lastly, they learned how to install the python environment and access the code through GitHub for the latest versions of the code. 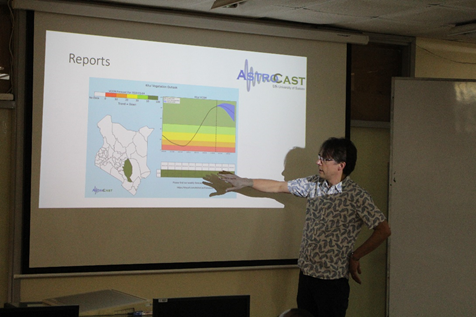 VCI is one of the indices calculated from remote sensing data, used to asses drought situations and determine its occurrence especially on areas where drought episodes are localized and ill defined. This satellite data tool is an improved technology towards better forecasting, timely and accurate information on vegetation conditions and severity of drought by noting vegetation changes by comparing with historical values which is a critical issue in the majority of Sub Sahara Africa

VCI compares the current state of the vegetation as measured by the normalized difference vegetation index (NDVI) to the range of values observed in the same period in previous years. NDVI is a graphical indicator used to analyze remote sensing measurements, often from a space platform, assessing whether or not the target being observed contains live green vegetation

According to Lilian Ndungu, RCMRD Agriculture and Food Security thematic area lead under SERVIR East and Southern Africa, this forecasting tool seeks to address the shortcomings of Early Warning Systems by increasing the credibility and relevance of forecasts. If implemented, VCI will play an important role in drought early warning systems which help to anticipate the risk of food crisis at local and global scale most especially in Sub Sahara Africa. This will be achieved through its support for monitoring, and predicting short- and long-term environmental conditions. The data is made available to the end users working in drought monitoring and conservancies who use the satellite data imagery to make informed decisions after observing and noting the trend and condition of current vegetation.