The National Land Commission (NLC) has unveiled two land tenure documents and one Kenya Natural Resources Atlas to guide the use of the land factor of production to ensure that Kenya was food secured.

The Large Scale Land Acquisition Safeguards (LSLAS) 2022 and a report on the effects of land fragmentation on land use and food security that was undertaken in 13 Kenyan Counties to improve food security and enhancing livelihoods. The 13 are: Isiolo, Kajiado, Kiambu, Kisumu, Laikipia, Makueni, Nakuru, Nandi, Nyamira, Taita Taveta, Tana River, Trans Nzoia and Vihiga.

Speaking during the launch at the Regional Centre for Mapping of Resources for Development (RCMRD) the NLC chairman Mr. Gershom Otachi said that land fragmentation was responsible for low agricultural productivity attributed to the food deficit in the Kenya. 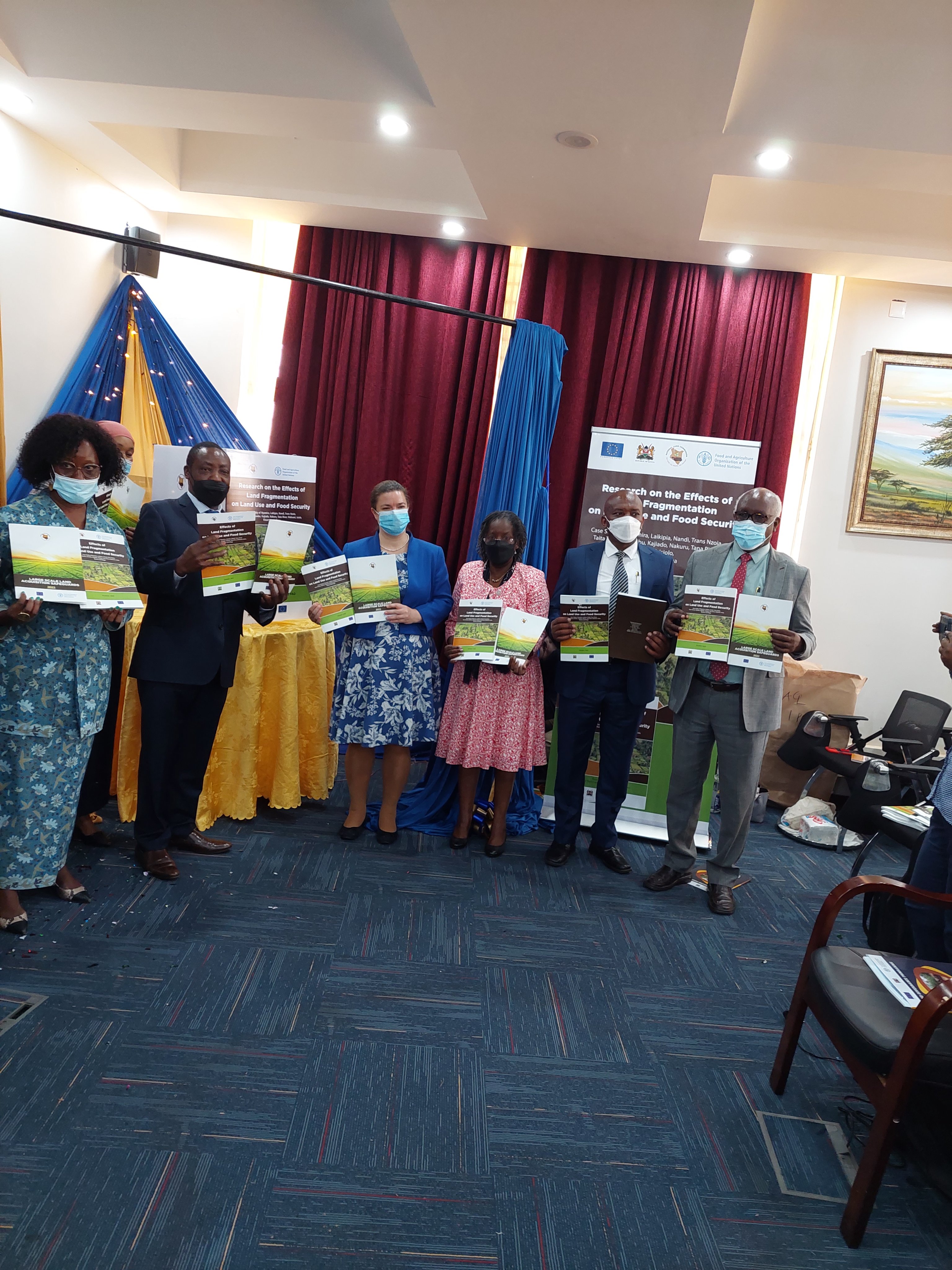 Otachi noted that the report provided information on the current situation of land fragmentation in the 13 counties in Kenya, detailing the status of food security, the farm size, efficiency, land management approaches and institutional provisions.

“This land fragmentation research study shows to what extent land is affecting production, the reason why there is need to curb land fragmentation and also a lot of challenges that we need to look at in terms of legislations, policies and awareness when it comes to matters land,” he added.

The report’s findings and recommendations, Otachi assured will be taken into consideration by relevant agencies but he also reached out to the leadership at both national and county levels as well as communities to engage more in the findings in order to address not only land issues but also food security in the country. The chairman acknowledged that the country might not have time to correct the previous messes but that it was time to reverse the negative effects surrounding the issue of land fragmentation and thus all need to work towards stopping fragmentation of land. All the planning tools and regulations about fragmentation of land which is not normally formal, Otachi noted are in the report and the primary issue now should be to sensitize the public on it.

Katrin Hagemann, Deputy Head of Delegation at the European Union to Kenya said Equitable land access, sustainable land use, and secure tenure are key enablers of investment and increased productivity, in the short and long term. She added that the documents launched on March 7, 2022 would be able to give direction and guidance to the National Land Commission as it implements Government priorities at the National and County levels, together with the Ministry of Lands and Physical Planning and other Government departments. 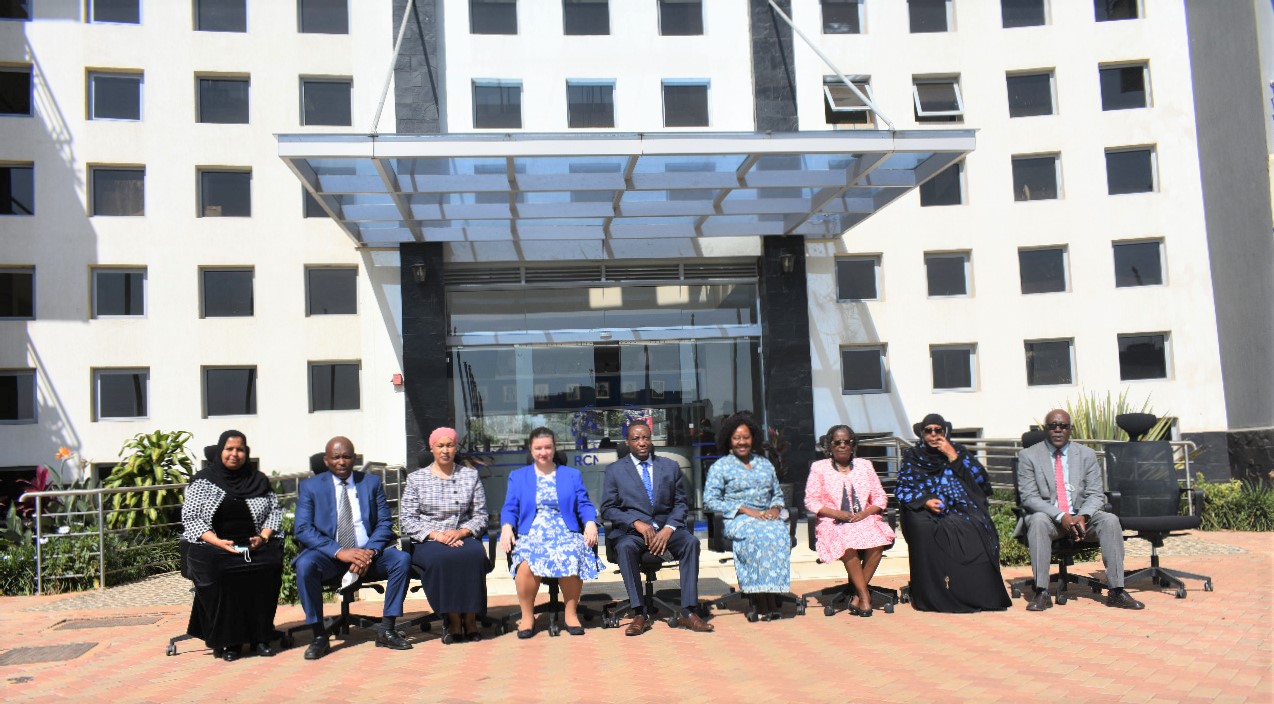 The EU support through the programme dubbed “Support to The Attainment of Vision 2030 Through Devolved Land Reforms in Community Lands of Kenya,” and implemented by FAO from 2016 and ending this Month of March 2022 saw EU Contribution of Kshs. 1.35 billion and FAOs contribution of Kshs. 60 million. According to Hagemann, the programme had achieved some remarkable impacts so far with 24 communities in Laikipia, West Pokot and Samburu Counties receiving title deeds for the first time under the 2016 Community Land Act and Nine counties including Turkana, Nandi, Baringo, Marsabit, West Pokot, Laikipia, Tana River, Samburu, and Vihiga now having digital registries, complete with GIS labs and the relevant support with various policies and laws.

At national level, the EU representative said FAO has worked with the NLC and the Ministry of Lands and Physical Planning to improve Land Policy and the legal framework, in line with global best practices. During the launch, Hagemann also announced the extension of the programme on digital land governance for a doubled amount of €20 million from the previous one that would now see the national coverage of the programme in all the 47 counties starting April 1, 2022 and running for the next five years.

On the other hand Carla Mucavi, the Country Representative, Food And Agriculture Organization (FAO) said some land tenure systems and practices currently being witnessed in the country pose a major threat to sustainability of land as a major factor of production. She said, “Sub division of land without considering optimal sizes for economic production renders smaller portions uneconomic units, while holding large tracts of land yet leaving them idle for extended periods also poses high opportunity costs and this study makes recommendations of how to counter some of the challenges."

The three documents launched will enhance and make sure that access to land and land management including rights for communities and governments are addressed optimally through tenable land governance practices.

RCMRD is supporting in the Development of Natural Resource Geoportal and Interactive Maps & Atlases. The Geoportal which will be hosted by @NLC_Kenya  will enhance centrality of geospatial data & interactivity of the atlases.