About 40% of the population in Rwanda falls in the age under 15 years and 29% between 16 to 30 years (United Nations Data, 2020). These age groups represent the school going segment of the population as stipulated in the education curriculum and systems and therefore schools are expected to play a critical role in this through science, technology, engineering and mathematics (STEM). Therefore, to achieve the vision 2050 under the Economic Growth and Prosperity and High Quality and Standards of Life for Rwandans, the country is focusing on human development as one of the critical pillars. Innovation, technology uptake and mechanization is also being encouraged and implemented through the Competency Based Curriculum, commonly referred to as CBC. Rwanda therefore has immense potential in transforming lives through integration of STEM and social sciences in its education systems.

The Regional Centre for Mapping of Resources for Development (RCMRD) through the SERVIR Eastern and Southern Africa (E&SA) project promotes STEM through mentorship in Earth Observation fields and application areas, linking classroom activities to applicability of the same in finding solutions to daily societal challenges. RCMRD-SERVIR E&SA has partnered with the Rwanda National Commission for UNESCO (CNRU), Rwanda Education Board and Rwanda Space Agency to promote STEM uptake through the Rwanda Space Challenge program. The Centre participated in a recently concluded event, known as the Boot Camp for STEM, where instructors and students met in Kigali, Rwanda. The event was organized by UNESCO in partnership with the Government of Rwanda, Ministry of Education (MINEDUC), Ministry of ICT & Innovation (MINICT), Rwanda National Commission for UNESCO (CNRU), Rwanda Basic Education Board (REB), Rwanda TVET Board (RTB), and the Creativity Lab under the theme “Re-imagining and Re-thinking STEM Education in the Fourth Industrial Revolution’’. The event that ran from 28th February to 4th March 2022, and was officially opened by Hon. Gaspard Twagirayezu, Minister of State in Charge of Primary and Secondary Education, Ministry of Education (MINEDUC). RCMRD and UNESCO Regional Office for Eastern Africa, Nairobi, Kenya gave keynote addresses on Space Challenge & STEM Initiative for Schools and the value of STEM education in the Fourth Industrial Revolution respectively. 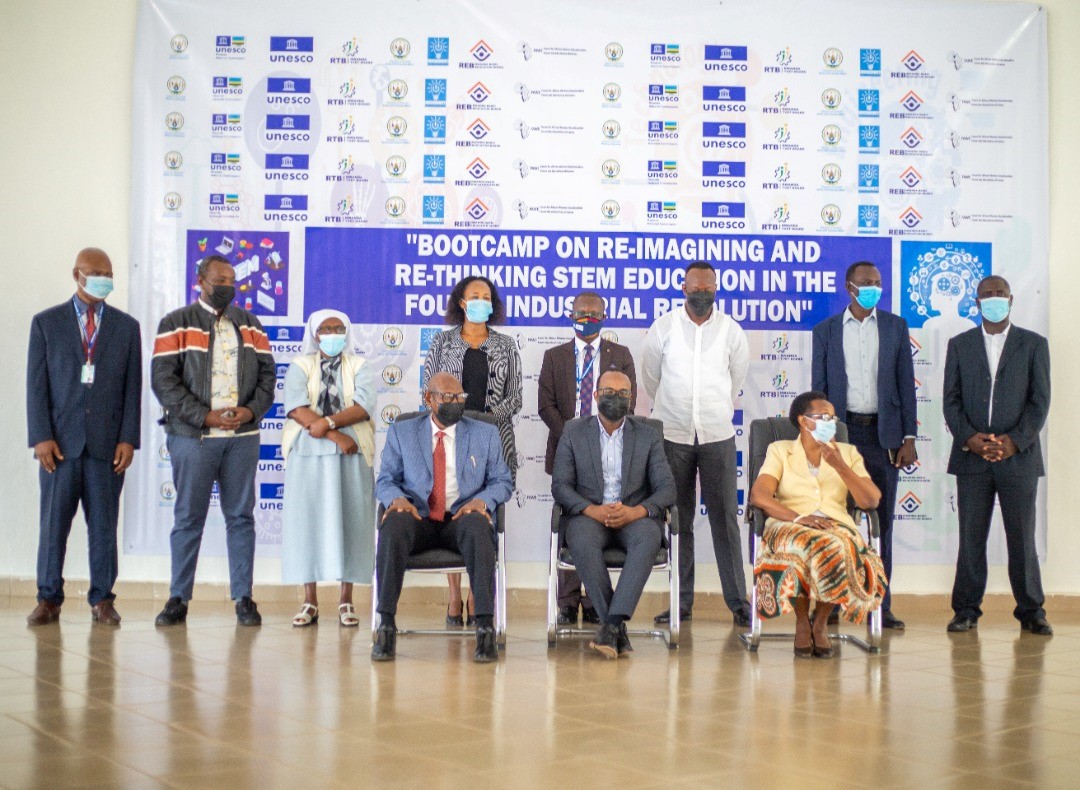 Caption: The chief Guest Hon. Gaspard Twagirayezu, Minister of State in Charge of Primary and Secondary Education, Ministry of Education (front row in the middle), Mr. Albert Mutesa, Secretary General, Rwanda National Commission for UNESCO (seated right of the Minister) and other guests during the opening ceremony.

The event provided the foundation for enhancing skills in robotics, artificial intelligence and modelling, topics from which learners can advance their careers in space technology and aerospace engineering in future, in line with African Union Space Program. During the boot camp, the RCMRD’s User Engagement Lead, Mr. Kenneth Kasera took the students through a presentation on the principles and importance of studying space science in relation to Earthd observation technology. 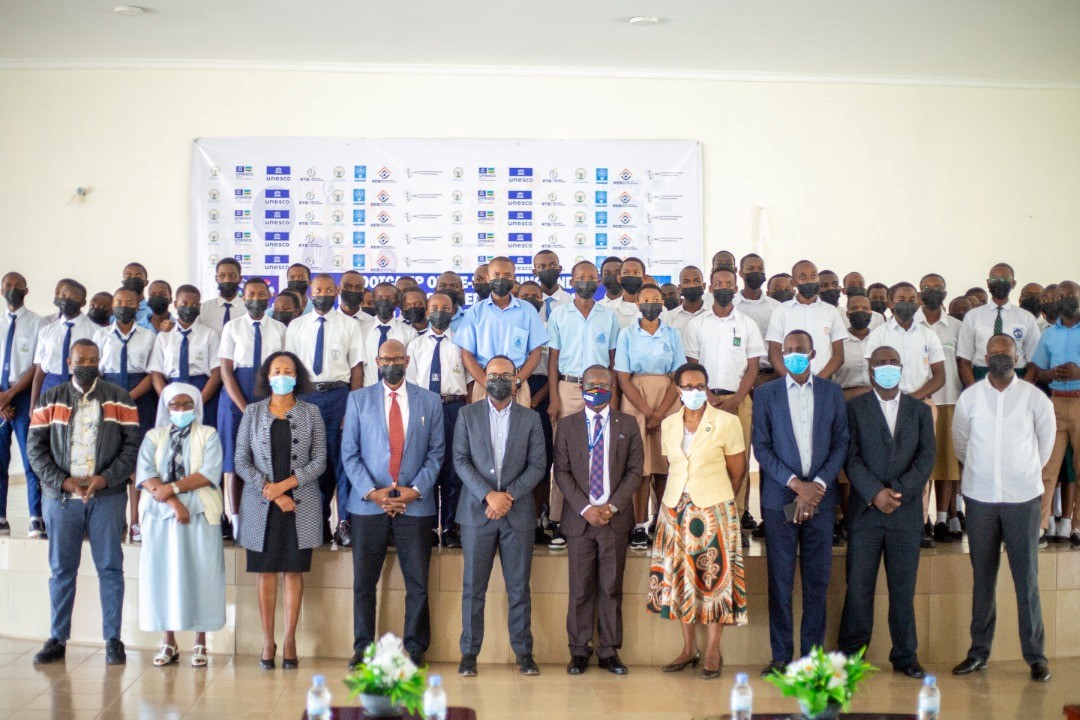 Caption: Chief Guest Hon. Gaspard Twagirayezu, Minister of State in Charge of Primary and Secondary Education, Ministry of Education (5th from the left), students and other boot camp participants after the opening ceremony. 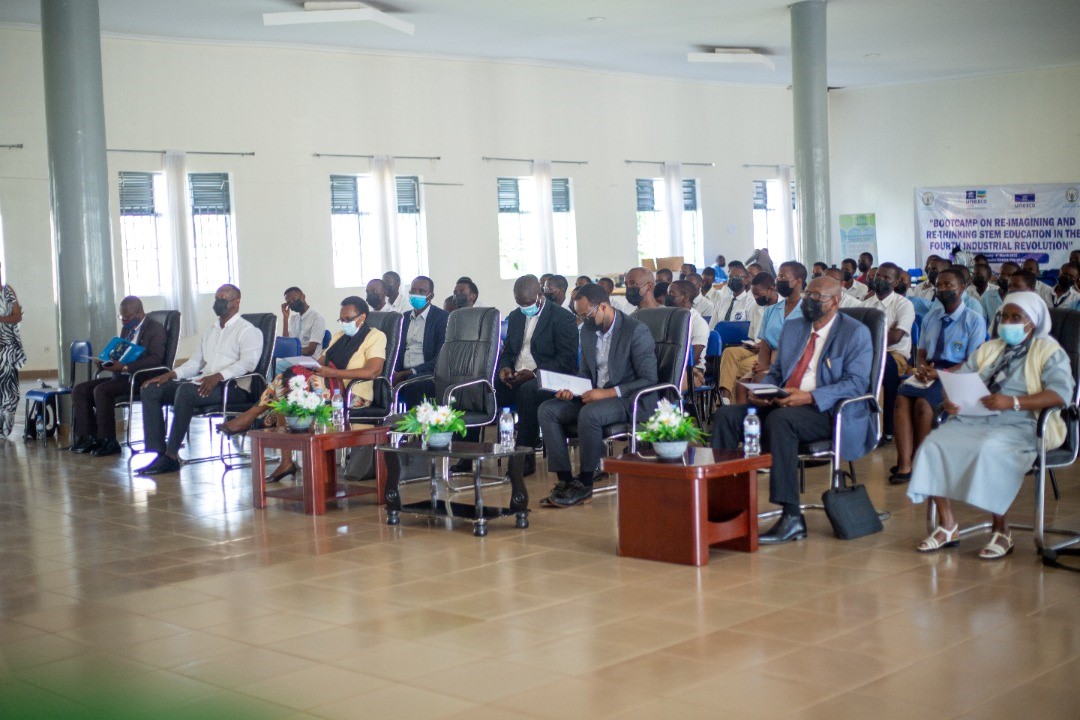 Caption: The participants listening to the keynote address.