The 54th Session of the Governing Council of the Regional Centre for Mapping of Resources for Development (RCMRD) was held was held virtually, from November 12 to 16, 2020.

RCMRD’s Governing Council Chairperson Elizabeth Bonolo Khumotaka, who is the Permanent Secretary in the Ministry of Land Management, Water and Sanitation Services (MLMWSS) in Botswana presided over the opening of the 54th Session.

The Governing Council (GC) meets every year to examine RCMRD’s work and relationships with its partners. The Council is composed officers of the rank of Permanent Secretary or Principal Secretary in the ministries of Lands, of 20 member States. It is a forum of governments at the Principal or Permanent Secretary level during which policy guidelines and the organisation's budget are established for the next one-year period.

The GC reports to the Conference of Ministers which meets every two years. The GC reviewed and approved implementation of the 2020 Annual Work plan, considered and approved the 2021 Work Plan and received the 2019 financial audit report.

In its meeting, the GC adopted the following reports: The Report of the Director General for year 2020; The 2021 Work Programme and Budget; The Finance Committee Report, Tender Committee Report and the Appointments, Promotions and Remuneration Committee reports.

In its resolutions, the 54th Governing council reviewed the RCMRD Vision 2050 document that will replace the RCMRD Vision 2020 that is coming to an end this year, and that the Centre required to draft a new vision document, the Governing Council resolved that the document should be subjected to further consultation with a view to having it considered at the 55th GC meeting which would propose it for adoption by the Conference of Ministers at their next sitting. This would allow for buy-in at the highest level of decision making for the Centre.

The Governing Council also discussed about the Regional Centre Training Institute (RCTI) Master Plan where the RCMRD proposed to construct student hostels way back in 2012 and this proposal had been approved by the GC. However, the approved hostels proposal stalled due to lack of funding. The RCMRD revisited this matter and engaged a consultant to provide proposals on the best way to create a comprehensive master plan for the RCTI. The proposed RCTI master plan was presented to the 54th technical committee and GC meetings. The Governing Council resolved to adopt the proposal by the Centre to construct student hostels for the RCTI. 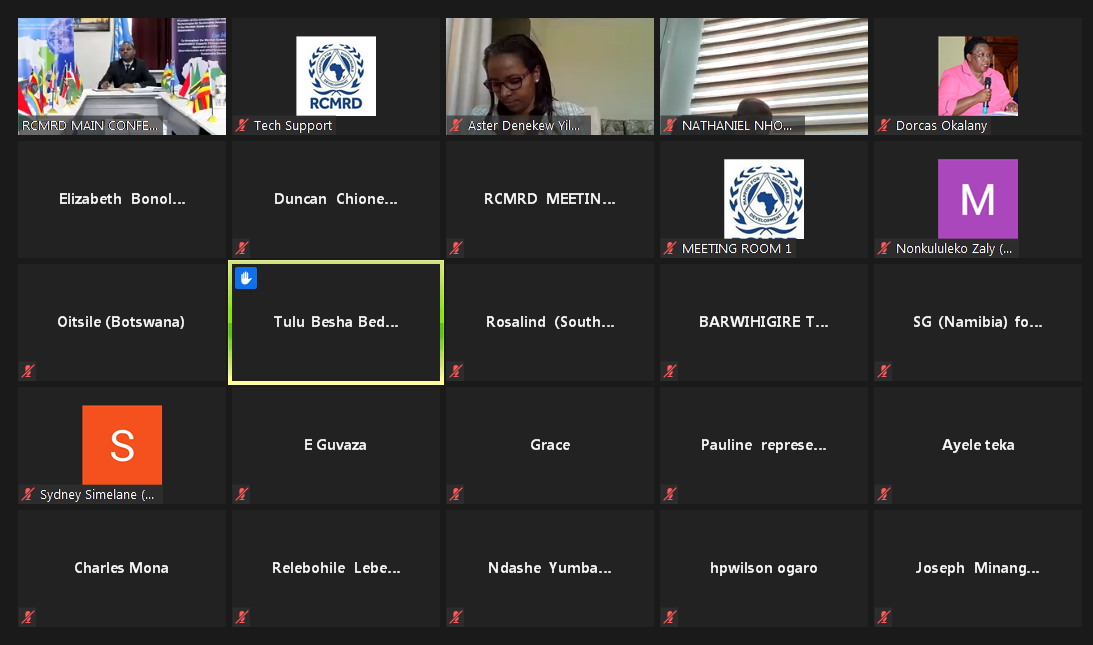 In terms of supporting research in the blue economy, the Governing Council resolved that the Centre should consider collaborations with other institutions who already own equipment and facilities for hydrographic surveys and marine research, and report on the progress of such collaborations in the 55th GC. This was agreed after realizing that Earth observation technologies are key for research and management of ocean and inland freshwater resources to spur the growth f the blue economy; additionally, the GC noted  that the Centre is strong in the use of Earth observation data technologies, but not strong in the field of marine applications, and does not own the relevant equipment for hydrographic surveys and marine research (besides remote sensing capabilities).

The Governing Council directed the Centre to prioritize and phase recruitment for key vacant positions, as per the new organization structure which the meeting had reviewed and approved to facilitate a smooth running of the affairs of the Centre, on a need basis and subject to availability of resources to sustain those positions.

The GC heard that although the World Bank had supported the National Spatial Data Infrastructure (NSDI) initiative and further developed it to an Integrated Geo-spatial Information Framework (IGIF), which is slightly broader than the NSDI concept, member States were struggling with establishment of NSDI.

The final resolution was on the use of Continuous Operating Reference Stations (CORS) and African Reference Frame (AFREF). Here the Governing Council urged member States to use the Network Control Centre available at RCMRD and encourage collaboration with the private sector in attainment of the AFREF.

The GC thanked the RCMRD management for the successful virtual hosting of the 54th GC meeting. The venue for the 55th  TC and GC meetings will be Nairobi, Kenya from November 15 to 19, 2021, while the 56th TC and GC meetings and the 12th Conference of Ministers would be held in Uganda in 2022.