Using earth observation technologies to benefit land use in Rwanda

On May 30, 2022, the Regional Centre for Mapping of Resources for Development (RCMRD) through the SERVIR Eastern and Southern Africa (SERVIR E&SA) Project launched a two-day workshop with main objectives to showcase, disseminate and exhibit the tools, products, methods and data that SERVIR (a global network of regional partners dedicated to environmental management) has co-developed; and facilitate partnerships, networks and stakeholders in the four SERVIR E&SA thematic areas.

In the joint meeting with RCMRD and its partners in Kigali, Rwanda, RCMRD Director General Dr. Emmanuel Nkurunziza observed that Rwanda has already benefited a lot from the Centre’s projects in the fields of agriculture (crop monitors), land use, land cover and ecosystems (land cover map development), weather and climate (Space Challenge for schools) and water and related disasters (monitoring of lakes) natural resources and more.

Photo 1: Participants during the Open Day held in Kigali, Rwanda.

According to Dr. Octave Semwaga, Director General for Agriculture Modernisation in the Ministry of Agriculture and Animal Resources, this is an opportunity for researchers, government officials and other development partners that have been brought together, to embrace new available services for the best use of environmental management and especially land use among farmers.

“It is an important occasion for agriculture and farmers in general, because all agricultural activities are done in land which is a natural resource to be well managed. Such a workshop helps us see what has been done in all natural resources that we have in the country, and what kind of ways should be set up to make sure our stakeholders are informed and benefiting from the process,” he said. 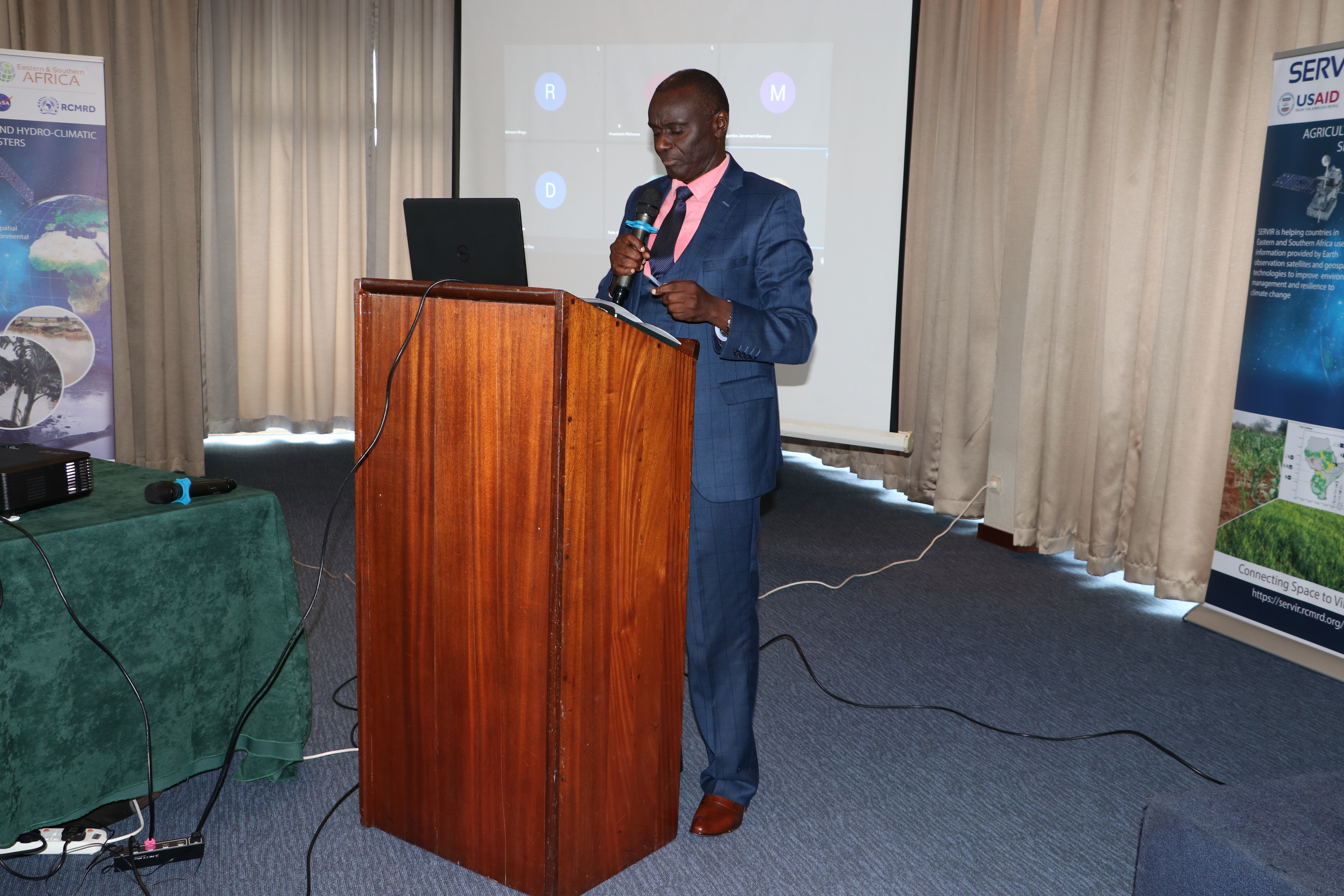 There is an RCMRD project in collaboration with the Ministry of Agriculture and Animal Resources to monitor crops, to help them determine the results that would be obtained during planting and if there is need for taking preventive action. “We are here today as RCMRD for showcasing services and products that we have co-developed with our partners in Rwanda. These partners include MINAGRI, Rwanda Metrology Agency, the Land Authority and others. We are trying to develop these services to ensure that they are actually answering the questions that we have on the ground.” RCMRD's DG Dr. Nkurunziza said.  Over the years, Nkurunziza added, “this Centre has provided some services in Rwanda including land use and land cover mapping, and now we are doing crop mapping which is very important in monitoring crop health, it can show whether the harvest will be optimum or actually coming down.”

Developed services and products are meant to address the developmental challenges in Rwanda within the project geographical scope in the areas of Weather and Climate, Land Use Land Cover and Ecosystems, Water and Water Related Disasters. In the past three years, the Centre and its partners has co-developed and implemented the Rwanda Crop Monitor, the Rwanda Space Challenge where we work with the Ministry of Education, UNESCO Rwanda, TAHMO and Meteo Rwanda.There is also the Land Use Decision Support System among others.

In Rwanda RCMRD works with the Ministry of Agriculture to monitor crop production as well as schools to encourage young children to study science, the Land Agency for Land Map cover mapping, used in the planning the land and environment. "We are working on this project with the Ministry of Agriculture and with the US Space Agency (NASA), we have some information that will the help the local authorities here," said Dr. Nkurunziza.

“We also have an important program we will implement with the University of Rwanda (UR) to promote the adoption of Space Science in our schools. We have a program we do with UNESCO dubbed “Space Challenge” where we bring together secondary schools in Rwanda to encourage young people to take interest in Science and Engineering. We will be doing that with UR and provide mentorship so that we have Rwanda Space Scientists.” Nkurunziza explained. He said that this initiative will be taken to the University as an academic entity that produces future scientists. “We need to continue upgrading young people’s skills and we hope that they can come and help us creating critical maps needed to really harness the fourth industrial revolution,” he said.

Rwanda is also working with RCMRD on another project that the agency is partnering with the African Union (AU) on monitoring land degradation. There was also staff training on new technology, collaboration with schools to show students how to combine information to produce the best results.  He informed participants that they would be launching the university mentorship at the University of Rwanda later in that week.

Dr. Nkurunziza said that while much has been done, there is still a gap in productivity due to the limited knowledge of those who should use it. "In general, Rwanda is still lagging behind on fully utilizing earth observation technology even though there is a behind the space Agency. Utilisation of Earth observation is still low, which is mainly due to the fact that the knowledge has not been developed enough to allow people to know how to use or how they can work in this earth observation field yet," he said.

The Director General of the Rwanda Space Agency, Col. Francis Ngabo, said that they were going to work with RCMRD to bring in services that would provide more expertise in Rwanda in the short term.

RCMRD was established in 1975 and is headquartered in Nairobi, Kenya. It is made up of 20 member states of East and South Africa, including Botswana, Burundi, Comoros, Ethiopia, Kenya, Lesotho, Malawi, Mauritius, Namibia, Rwanda, Seychelles, Somalia, Africa, South, South Sudan, Sudan, Eswatini, Tanzania, Uganda, Zambia and Zimbabwe.